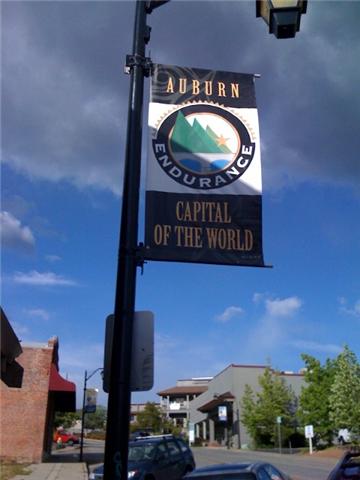 Pre race and general:  Registration, T2, and the finish are all in Overlook Park near downtown Auburn.  At registration you will get 2 garbage bags, one for each transition. You can set up your gear in T2 after registration or wait until the next morning. The transition areas are first-come, first-serve for all racers. At first it seems like it would be a nightmare but the races are small and the transition areas weren’t crowded.  After the swim, you bag all your gear before taking off on the bike, and the bags are transported to T2. The swim is in Folsom Lake and the water temp is generally 64 – 68. There is one women and one men’s wave per race. The bike starts climbing right out of T2 so it’s a good idea to have your gears set accordingly. All-in-all, the race is run, well supported, and the scenery is beautiful.

Why I did it:  After three previous years doing Wildflower, I wanted a change and something I new would be longer on course time for training for IM Mont-Tremblant  in August.  I had done Auburn “Worlds Toughest Half” a few times and knew it can be very hot, 117 degrees one year, and it is hillier than wildflower, 6000’ climbing. With the hills on Mont- Tremblant, this would be a better check where I am.

Swim: T1 was moved close to boat ramp, but out of the boater’s residue.   This is a VERY casually run race. The swim waves were 5 minutes apart.  There wasn’t a lot of discussion where swim start line was, and with last minute changes with International race, the ½ started 120 degree difference in direction.  My swim was OK and there wasn’t as much floating wood and junk as I remembered.  All ages of men started at once, and the numbers were not uncontrollable.  T1 is weird for you need to Bag all your gear in provided marked bag to be picked up later, but with pre thought it is really just throwing swim gear and towel in. Vintage David Parker circa 2006 SB Tri Club (yes, kids, this is what the kits were like back in the day. Dave still races the Griffen today!)

Bike:  Hills. Hills, Hills.  Out of rattlesnake park is the start and the climb to T2 is 1200’.   This was first year they did a “mini tri” that started out 500m swim after the 1/2 started.  There were mini tri folks walking bike before the gate out of the park and first mile mark.  Some of the hills hit 12-14%, but nothing real long.  You ride past T2 and through the Auburn outskirts then it is all rolling hills up and down crossing I-80 over or under.  Most of bike is tree covered and beautiful.  At the most northern part riders cross I-80 for a small loop through another park.  There is a hill like H Street out of Lompoc, which finishes with a right turn and a shorter steeper version of the wall.   Everyone ping pongs up to some degree.   After that some rollers then it is a steep downhill in the park.  This had really bad road and with tall pines and my dark sunglasses, it had me with hands feathering breaks.  Plus, I was looking for the place I saw someone go off course in front of me the last time I raced Auburn. The bottom of the road is parallel to the river, so another nasty climb out.  Similar to Gibraltar bottom to Cold Springs west.   The rest is backtracking rolling primarily down, but there are some “wake up” hills along the way. One hill they call Lemond’s hill because I understand Greg Lemond said it was nasty.  First time it is because you cannot see top how it crowns, but I think there are worse on this course.

I had my worse luck with two flats, one on back first which was taken care of fast, one in front that I had to find the hole and patch which made my race a paid training day.

Look familiar? Yes, Auburn is also the home of the Western States 100 mile race. No swim warmup, No spin on the bike. (photo by Luis Escobar)

Run:  3 laps. T2 is in a grass soccer field in Overlook Park, which I like.  The Park is the only part of run that is flat.  Right out of the park, you run up a 15‘hill.  Then it is a slight downhill in the shade and next to a flowing flume.  Nice.  At first road I was surprised to take a left, previous races were a right on road up a 5-6% grade.  The road makes almost a U-turn while on downhill with the next section a great view of American river.   It is hot for this section.  It flattens to a stone service road and flattens out to a fence (previous races used as the turned around). This time went another 100 yards and then a left up to a single track that heated up and in the downs, there was some steep short switch backs to shock the legs.  Then the route creeps back up to the U except you take a right up another ½ mile till under a train trestle back in the park for lap or finish.

Review: I liked the race because it is hard, but I’ve never used it as an “A” race.  I liked the support and they used all Hammer Nutrition stuff. I didn’t like the disorganization in the transitions day before and race day.  There used to have numbers on racks. This was first come first serve. With dropping T2 stuff off day before, or in morning, no idea how tight area is when you arrive.   Swim area was not set up day prior. Beer was not served to the finishers. But they did get medals.

(Editor note: If you want concierge service, you’ll get what you pay for at the full Ironman in Mont-Tremblant, in Quebec. Keep following SB Tri's David Parker, Sandy Roberts, John Herzog and Liz Inglese as they represent Team Blue In August 18, 2013)